Flat-screen televisions are too thin to accommodate high-quality speakers, like their CRT (cathode-ray tube) cousins did in the past. True sophisticated flat-TV speakers may take some time to become a reality, given the TV industry’s increased focus on display size and fondness for pixels. Until then, it appears that a soundbar is the only option. Can you mount Soundbar above TV?

Some may think it’s a silly question, but I believe it deserves a good response. A soundbar is usually mounted below a television, but it can also be mounted above one. Depending on the model, the placement may determine the soundbar’s performance and appearance. If the speakers are upward-firing, placing the soundbar above the TV makes more sense in terms of acoustics.

What are the Most Common Soundbar Designs

Not all soundbars are created equal. And I’m not simply referring to the number of channels available. Some soundbars use traditional front-firing speakers, while others feature upward-firing speakers.

Each type is better suited to a specific use. And each response to acoustic elements in the environment in a unique way.

These are the speakers that do not project sound upwards. What is the significance of the design?

For starters, it’s important because you need to strike the correct balance between how you hear and how you see the image.

It is suggested that the television be placed at eye level. In the past, rear-projection TVs that weren’t at eye level didn’t appear as brilliant. Even though today’s flat-screen TVs are significantly brighter, eye-level placement is still beneficial for avoiding neck strain and other issues.

Similarly, the classic hifi rule of thumb states that a speaker’s tweeter should be shooting at ear level.

It can be not easy when utilizing a conventional soundbar, but only at first appearance. You could believe that projecting the TV and the soundbar at the same height is impossible since the soundbar would block the screen.

On the other hand, a soundbar may be readily tilted so that the tweeter is blasting directly at your ears. Even if you don’t have that, you can easily project sound below ear level. A TV can be slanted down to aim at eye level when mounted.

Because sound travels in waves rather than in a straight line like light (though light does have some wave-like properties), some sound waves will reach ear level even if a speaker is situated below the ear. It is especially true for the higher-frequency waves in the mid-and low-frequency ranges. The old rule is to aim the tweeters at the ear, which means the woofers (especially if there are many) will be well below ear level.

There are, however, other issues to consider. The soundbar can easily block the remote control receiver. Above-TV-mounting options are frequently considered in instances like these. Which isn’t a horrible concept, mainly if the soundbar can be aimed near to your ear.

Soundbars that project upwards is a different breed. To produce a more immersive soundstage, they rely on being able to bounce sound waves off the ceiling. The majority of upward-firing soundbars use Dolby Atmos.

This technology, as you may know, adds height channels to soundbars.

So, can you put soundbars like this over your TV? An upward-firing soundbar would, in theory, be a better fit for installation above a television. Sound waves must travel a greater distance to reach the ceiling if the soundbar is mounted beneath the ceiling. As a result, its positioning may limit the soundbar’s capability.

However, just the overhead sound will be affected. And depending on the size of your space and the height of your ceiling, it may not be evident.

What are the Dos and Don’ts of Soundbar Shopping/Placement Considerations?

Shopping will be easier if you know or have already selected where you will place the soundbar near the television.

If you plan to mount it, look for a soundbar with specialized mounting options, such as rear-positioned keyholes for brackets. If you’re going to put it somewhere else, though, mounting-friendly features aren’t necessary. A simple long bar with no keyholes would suffice.

Here are a few other things to think about while looking for a soundbar or installing/mounting one:

Best Soundbars to Mount Above TV 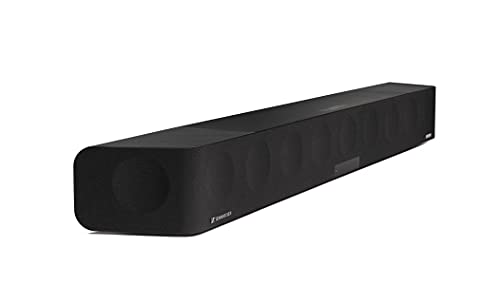 The Ambeo Soundbar from Sennheiser is stunning in both senses of the term. It’s a monster, with a width of about 1.3m, making it notably larger than the competition. (It’s also a lot heavier, which is useful information if you plan to take the bus back from the store.) The extra space has, however, been put to excellent use. Rather than depending on a separate subwoofer, the Ambeo incorporates larger, more powerful drivers within its soundbar, which works flawlessly.

First and foremost, the Bluesound Pulse Soundbar+ stands 14cm tall, which means it will most likely block part of the screen when placed on the same surface as a TV. The Soundbar+ is designed to be wall-mounted, even though it comes with detachable kickstand legs. The soundbar comes with a mount for this reason, and the cable cover can be placed at the bottom or top of the soundbar, with an integrated accelerometer sensing which way up the bar is.

Bowers & Wilkins’ first Dolby Atmos soundbar is a standalone item that produces 3.1.2 channels of audio from a single unit, with no surround or subwoofer upgrades available. Instead, it incorporates specialized subwoofer drivers on the top face alongside its vertical height drivers.

The Panorama 3 is only 6.5cm tall, so it should fit beneath most TVs, but a bracket is supplied in the box if you prefer wall installation.

Conclusion on Can You Mount Soundbar Above TV?

Most consumers prefer their soundbar to be somewhat below ear level and their television slightly above eye level. The opposite may be preferable in some cases, such as in theaters where the floor or chairs slant upwards.

It’s not an issue whether to put the soundbar below or above the TV. Is your soundbar designed to be placed under or below your television? You should think about this and double-check rather than ask: can you mount soundbar above TV?