Compression is one of the most significant and widely used techniques in music. Hence a compressor pedal in a board or rig is very important and makes sense.

This article will go over compressor pedals in greater depth, including how they work and how they affect guitar signals.

What Does A Compressor Do?

Ever sat down and wondered what the function of a compressor was? A compressor performs what its name implies: it compresses sound.

By shaping the loudest elements of the audio stream, a compressor pedal evens out the loudness of your performance. In addition, most compressors increase the remaining components of the sound. It has a variety of impacts, including making your guitar seem louder, adding a touch more shine/sparkle to your tone, and enhancing clarity and sustain.

The compressor brings the peaks and troughs of a sound closer together by reducing the dynamic range of that sound. Overall, the sound is smoother and more balanced.

The effects first compression-only affect the loudest elements of an audio signal. The threshold control determines the actual level at which the compressor kicks in.

The compressor shapes the loud bits, thereby making them appear quieter while preserving some of the original subtleties.

The compressor pedal determines how the loud parts are molded and the settings employed.

The compressor pedal subsequently raises the overall volume of the sound, resulting in a higher average volume, by making the loud parts of the audio signal quieter.

It also makes quieter elements of the music louder and more noticeable (for example, the sustain part of a guitar note).

What are the Controls, Settings, and Parameters for the Compressor?

You may have experimented with a compression pedal at your local guitar store and been daunted by many parameter knobs.

Compression is a subtle effect, and it is possible to employ one without hearing any difference in the settings. It is also possible to go too far with compression and end up with a flat or muddy sound.

Threshold, ratio, attack, and release are the four main controls of most guitar compression pedals. All four of these variables have varied effects on one another.

The Threshold for Compressor Pedal

The first parameter of most compression effects is the threshold.

The threshold setting determines how strong the compression impact will be. The decibel threshold is measured in decibels (dB).

If the threshold is set to -5 dB, any signal above that level will activate the compression effect.

The ratio of Compressor Pedal

The second parameter of most compression effects is the setting ratio.

The ratio parameter controls the compression effect’s gain reduction. The most common ratios are 2:1, 4:1, and 8:1.

But what exactly does this ratio imply?

When the ratio parameter is set to 4:1, the strength is reduced by 1 dB for every 4 dB an audio signal exceeds the threshold value.

To put it another way, the gain will become cut in half. If the ratio is set to 8:1, the strength will be reduced by 1 dB for every 8 dB that the audio signal exceeds the threshold or by 8.

Compared to a lower ratio setting, a greater ratio will significantly reduce the overall volume.

Setting the Attack of the Compressor

The attack is the third parameter in most compression effects.

A short attack setting of 1-10 ms, for example, suggests that the gain reduction ratio of the compression effect will occur 1-10 ms after the audio stream has exceeded the threshold.

The compression effect will engage, and the gain reduction ratio will be met 40+ ms after the threshold parameter is reached if the attack time is 40+ ms.

Short and fast attack times can help tighten up and balance out the loud, unwanted dynamics spikes that come with fingerpicking and funky guitar styles.

Too much attack, on the other hand, will make your tone sound flat and lifeless.

Longer and slower attack periods can help a sound have more punch and impact, but they can also amplify any flaws in the dynamics of a performance.

Most compression effects have a fourth setting called release.

The release parameter controls the time it takes for the gain-reducing component of the compression effect to be released from an audio stream. The release is timed in milliseconds, just like assault (ms).

Shorter release periods preserve more of an audio signal inherent dynamic. A short release period mixed with a big ratio, on the other hand, might cause undesired pulsating effects in the overall sound.

The pulsing effect is created by the fast recovery of the gain of a signal after it has been significantly decreased and then swiftly released.

Longer release durations generate a more even dynamic, but they can dry the guitar tone like a fast attack time.

Compression of the Soft and Hard Knees

The gentle and strong knee compression is another time-based element worth considering.

The threshold setting is linked to the soft and hard knee settings, offering an additional layer to the gain reduction impact gain of the compressor.

As the audio signal passes above the threshold setting of the compressor, soft knee compression is applied gradually to the signal.

When the audio signal hits the threshold parameter, hard knee compression is administered its entirety. It is similar to a more rapid attack.

Most compressor pedals have a toggle switch between mild and hard knee if the choice is provided at all.

What are the Best Compressors? 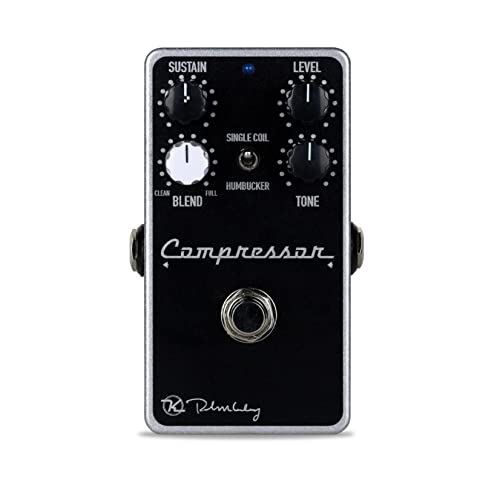 The most popular stompbox from Robert Keeley has been tweaked to make it even more tweakable. It is still well-organized, thankfully. A release switch for humbucker and single-coil pickups has been added to adjust the right assault.

A blend control determines how much compressed signal you want — entirely counterclockwise for a half-and-half blend, while it is fully clockwise for all crushed quacks.

It allows you to control the peaks of your guitar playing. Compression can result in a high-end and harmonic response loss, which can be compensated for by a tone control. The Keeley Plus Compressor is our top selection for the best compressor pedal because of its incredible tone and value for money. 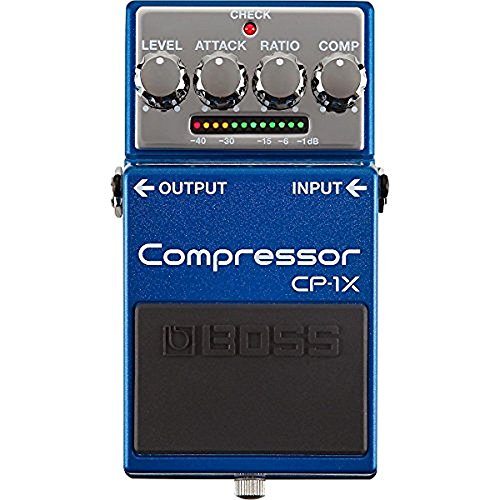 The Boss CP-1X Compressor takes things a step further by employing Multi-Dimensional Processing (MDP) to retain your fundamental tone intact. It simply reduces overtones so that your signal remains as clear as possible.

Meanwhile, the control panel is usually well-designed, with knobs for compression, ratio, and attack and a volume knob for controlling your output.

In the style of Knight Rider, there is also a gain-reduction meter that shows how much compression you are applying at any particular point in time. It is quiet because it runs on 9V, that’s internally converted to 18V, giving it plenty of headroom.

Conclusion on What Does A Compressor Do?

Choosing the right compressor pedals for your pedalboard might be tricky. The sheer number of guitar pedals on the market may make the task appear insurmountable. Many guitarists overlook the compression pedal when setting up their pedalboard, which we looked at today.

So, what does a compressor do? Compression is a subtle effect compared to distortion, delay, or phase shifter, so many guitarists, particularly beginners and intermediates, overlook it. When used appropriately, though, a compressor pedal may significantly shape and enhance the tone of your guitar.